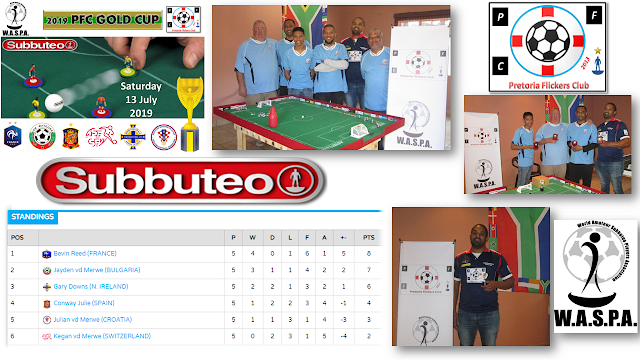 Saturday 13 July 2019, Pretoria, South Africa :
The big question on everybody's mind was whether Jayden vd Merwe would make it 5 straight wins in this event - as Jayden has captured every edition of this event since it's inception back in 2015? Having already won it 3 times in a row between 2015 - 2017, the "original" Gold Cup was permanently handed over to Jayden where it is proudly displayed on his bookshelf in his bedroom!!!
Round 1 action saw Jayden record a lucky but hard fought 1-0 victory over Julian vd Merwe where Julian tested Jayden's goalkeeping skills on no more than two occasions. Conway Julie took a 1-0 lead over Kegan vd Merwe, but Kegan soon scored afterwards to restore parity. Bevin Reed then raced to top spot thanks to a 2-0 win over Gary Downs.
Round 2 saw Gary score an acutely sliced shot (at pace) to register a 1-0 win over Julian - a stunning goal certainly worthy of "Goal of the Day". Bevin had to grind out a 1-0 win over Kegan to remain top. Then….the MAJOR upset of the day, as Conway took a 2-0 lead over Jayden - this spurred Jayden into action with him getting 1 back, but all too late as Conway recorded a famous 2-1 over tournament favourite Jayden!
The pick of Round 3 saw the massive clash between Bevin and Jayden - the result went Jayden's way by 1-0, a "must win" for Jayden following the Round 2 disaster against Conway. That result also saw Jayden tie Bevin on 4 points on the standings - with the added comfort that Jayden was ahead on the "head to head" rule. Gary then dispatched of an "out of form" Kegan by 2-0, with Gary then joining Jayden and Bevin on 4 points overall!
In Round 4, Gary and Jayden played out to a 0-0 stalemate with both players missing out to go top. Bevin then topped the standings by himself with a 1-0 win over Conway. Earlier, the battle for 5th spot ended in a 0-0 draw between Kegan and Julian.
The business end of things - Round 5 saw Gary and Conway play out a 0-0 draw in the battle for 3rd spot, with the draw being enough to hand Gary a well deserved 3rd place finish. Jayden then offered himself a glimmer of hope to hold onto his title by recording a 1-0 win over Kegan. It was Bevin who would have the last say - as he completely dominated to record a 2-0 win over Julian and thereby breaking Jayden's 4 year reign as Gold Cup Champion!
Jayden will certainly look back at the Round 2 horror against Conway and the Round 4 stalemate against Gary as the defining moments when he had to "let go" of what has become his favourite event on the PFC calendar. Taking nothing away from Bevin - a well deserved triumph as Bevin occupied top spot from "start to finish". This latest triumph then also marks Bevin Reed's 14th WASPA title to date!

Individual acknowledgements on the day :
"Goal Blitz" : Bevin Reed ended the day as the top scorer
"Player of the Day" : Gary Downs for a well deserved 3rd place finish
"Result of the Day" : Jayden vd Merwe for inflicting Bevin's only loss in Round 3
"Moment of the Day" : Conway Julie for the massive Round 2 upset win of 2-1 over Jayden

As always, a big thank you to all who attended to make the day a great success. The next event - the PFC League 2 Cup, as we make a return to Bonaero Park !