Several events have been held in Belgium during the second part of June. Here is a brief summary of results.

In Bande, two tournaments have been organized by the club of Wamme as a good way to practice before the FISTF European Championships. Rochefort TS player Corentin Wauthy claimed the honors, finishing on top of the Swiss ladder with just more goals scored than Benoît Massart (Temploux) while returning player Raphaël Maillard managed to take the third spot. 16 players were taking part! 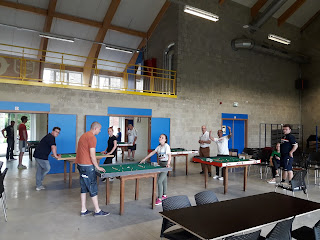 The other event in Bande took place on June 27 with 12 players competing in Swiss system. Jean Grosdent won the event with 10 points and a few more goals scored than Thierry Magermans (Temploux).

In Huy seven players competed on June 26in a round robin with Bruno Timpano being undefeated to win the trophy while Ralf Grégoire was runner-up thanks to more goals scored than Geoffrey Kelner.

The Templeuve club had another visit of Romania's Cezar Stoilescu on June 25 and this time there was no mercy by Geoffrey Marain who claimed another title, winning all his games in a very easy way.

Also in Templeuve, a promotional event held earlier in the month had a small turnout of four but many close games were played in a fair spirit. Eric Caillaux took the honors, finishing on top of the round robin.