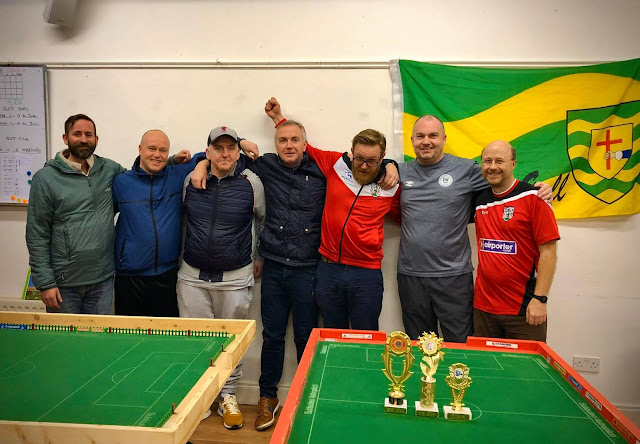 A new name for the Championship for this new season as we expand out of Ulster and head south to Leinster with Dublin set to host a round later in the season. No change though in the host county for the opening round, as once again Donegal welcomed some of the best players on the island. Eight players headed to Falcarragh on the far west coast for Europe’s most westerly Subbuteo competition with Kenny Beggs and Mark Farrell the favourites to take the title. As well as Irish Championship points at stake, the tournament also doubled as a WASPA competition so it was also an opportunity to make inroads on those world rankings. 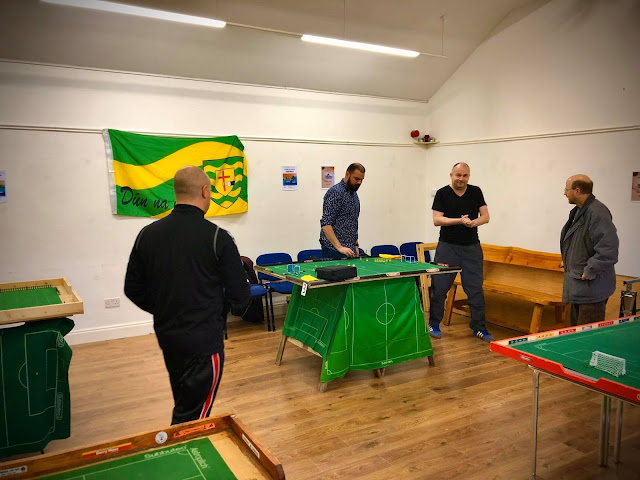 Group A hosted last season’s champion Mark Farrell, the current all-Ireland champion Kenny Beggs, last seasons 4th place championship finisher Martinog Bradley and newcomer Brian McCorkell who was playing in his first competition since childhood. Beggs and Farrell won their opening two fixtures with relative ease making their final group game largely academic with both already qualified for the semi-finals. But there’s always pride at stake when the two best players go head-to-head and Mark was looking for revenge following his defeat to Kenny in the final of All-Ireland Championships hosted in September. In a tight high-quality game Mark edged it 1-0 to top the group. Bradley meanwhile won his wooden spoon game 3-0 against McCorkell to finish 3rd. The debutant was handed the hardest imaginable group containing 3 of last year’s top 4 players, and he performed well to only go down 4-0, 3-0, 3-0 to high quality opposition.

New Derry City TFC player Jude Morrow was also making his first appearance at competition, this time in Group B alongside Oisin Mor, Brendan Rodgers and Strabane’s Mark McCrossan. Brendan started well beating Jude Morrow 3-0 in his opening fixture and then edging McCrossan 1-0 to top the group, but the top-spot was thrown into doubt when Oisin Mor beat him 2-1 in the final group game. How Oisin must have rued his 0-0 draw Jude as a win there would have seen him tied on points with Brendan and Mark. In the end it was Rodgers who topped the group courtesy of his 1-0 win over McCrossan who finished second on the same points.

Mark Farrell faced Strabane man Mark McCrossan in the first semi-final who was hoping for his first win over the Dubliner. The pair met in the semi-final of last season’s Strabane round of the championship in a game that Farrell won 1-0, and there was to be no change in winner with Farrell this time romping home 4-1. In the other semi-final Beggs beat Rodgers 3-0 to setup yet another final decider between Beggs and Farrell. In the third place playoff McCrossan and Rodgers locked horns for a second time. This time however there was to be no winner in normal time, both players scoring good goals to take the game to shots after a 1-1 draw, but it was Rodgers who landed the points winning the shoot-out 2-0. The final saw Farrell hold lots of possession in the first half, possession he turned to his advantage as he took a 1-0 lead into the second half. In the second period Kenny called himself for a finger-foul when lining up a shot that could have seen him equalize. It was a piece of sportsmanship that demonstrates why we call him “The Legend”, and acts as a reminder to all of us about the spirit in which we play the game. It was also perhaps Kenny’s last chance as Mark took advantage and added a second goal to ensure he would see out the game and be re-crowned “High King of Donegal Subbuteo”. In the plate Derry City TFC’s Martinog Bradley beat club mate Oisin Mor 5-0 in the Plate Final to make sure he stayed in touch with the top four going into the second round in Strabane in January.
Publié par Vincentcop à l'adresse 07:51