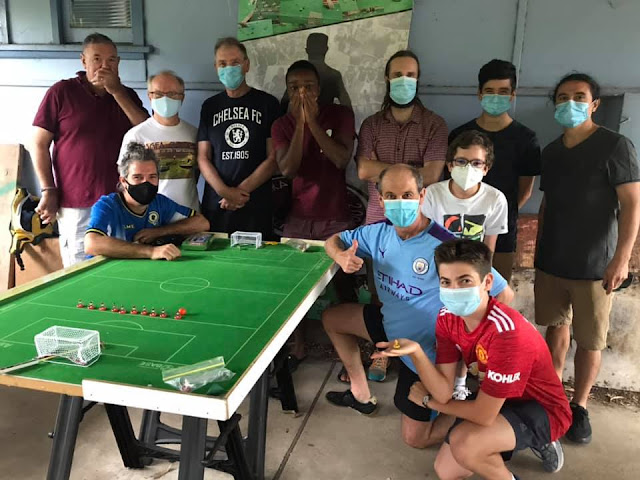 For the third year running, Western Sydney Subbuteo hosted the 'Christmas Binge Cup' to fill up the dead space between Christmas and New Year. A bumper crowd of 11 players, ranging from absolute beginners right up to the president of FISTF turned out to the temporary (COVID friendly) 'Clubhouse In The Carport' for the tournament. With players all donning masks following the recent outbreak in the Northern Beaches (there were a few doubtful looks cast in the direction of our visiting 'northern' falcons throughout the afternoon) a Swiss system was played out, guaranteeing every player would play most of their games against opponents of a similar level. A range of pitches were used, including the début of the Table Football Monthly Muddy Pitch™, which some players enjoyed more than (vocally complaining) others.

The randomly drawn opening round saw things going as predicted, with Steve, Adrian, Eliot and Geoff taking early wins. The second round proved much tighter, with 3 draws and two 1-0 results to keep all players tight on the table. Round three is where things really settled into a distinct pattern, with dark horse, Geoff, who had already had a win as well as a draw against top ranked player, Eliot, shooting to the top of the table with a victory over Steve. Meanwhile, Tim, playing in his first ever tournament outside of school, registered his first win, while Paul, predictably, played out yet another goalless draw to add to his collection.

The final round began with no fewer than 5 players still in reach of the title. Steve put his previous game behind him to come and shatter Eliot's chances of taking the prize, while Adrian did his bit to have a slim chance with a win over Othniel. In hindsight, those results meant that Ethan and Geoff's game was actually a play-off for the tournament honours - Geoff came out victorious to place himself clearly on top of the table. Meanwhile, Paul played out another goalless draw, this time against David, playing in his first ever tournament.

A successful day for the visiting Hipfingerz, then, with Geoff taking the title and Daniel putting in a personal best to find himself just behind the frontrunners. But, of course, Subbuteo was the winner - with a friendly, exciting tournament played, new players joining the ranks and a great finish off what has been the weirdest of years for Subbuteo playing.